Women in Swimming: A Brief History

In light of International Women’s Day having taken place on the 8th of March, this article will explore influential women in the history of swimming.

Although swimming was included in the Olympic Games in 1896, women weren’t allowed to compete in any of the sports until 1912. Even when women were allowed to compete in Olympic swimming, there was often much speculation regarding what they wore rather than their ability in the water. They were expected to be “modest” and wear clothes that covered the lower legs (even while they were swimming!), making it much more difficult for them to reach their full potential. We have come a long way since then, and I have written about the stories of just a few of the women who have helped us get here.

In the early 1900s, Kellerman made a swimsuit that revealed the lower half of her legs, making the sport more accessible to women (although this was very controversial at the time as it confounded expectations of how women should dress). The popularity of her one-piece suits meant that she ended up making her own line of women’s swimwear- this was the first step towards modern women’s swimwear. She played a significant role in popularising swimming as a sport, particularly for women.

Known as the “Mother of Women’s Swimming in America”, Epstein became president of National Women’s Life League (an organisation that focused on teaching girls and women to swim in order to avoid drowning) in 1912. She also founded the Women’s Swimming Association and campaigned for women’s suffrage.

On the 6th of August 1926, Ederle made swimming history by becoming the first woman to swim the English Channel (21 miles!). She completed it in 14.5 hours, beating the five men that had previously managed to do it by 2 hours. She did this despite the doubts of many at the time about whether a women had the strength or endurance to do it. She was crowned “Queen of the Waves” in New York City in September, and went on to teach swimming to deaf children in New York, having experienced hearing damage herself.

Torres is a 5-time Olympic swimmer, competing in 1984, 1988, 1992, 2000 and 2008, making her the first swimmer to represent the US this many times in the Games. She won a total of 12 Olympic medals. She competed in the 2008 Games at the age of 41, making her the oldest swimmer to earn a place on the United States Olympic team (ever). She was also the first swimmer to represent the United States in five Games. She now empowers women, encouraging big dreams, perseverance and healthy living.

A recent example of an inspiring woman in swimming, Mardini fled from Syria when her home was destroyed in the Syrian Civil War. She endured a difficult journey in order to reach safety, involving having to swim for three hours guiding her boat after its motor failed. By doing this she saved the lives of 20 others who were onboard the boat. At the 2016 Summer Olympics in Rio, she represented the first-ever Refugee Olympic Team. She has now been appointed Goodwill Ambassador for the UN Refugee Agency and promotes understanding of refugees’ stories whilst maintaining her passion for swimming and continuing to compete. 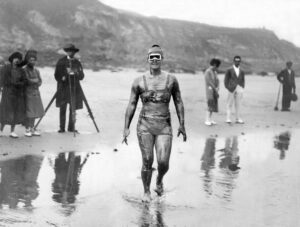